Macau ‒ its people are called Macanese ‒ is today a part of China, but in 1557 it became a colony of Portugal. Trade was the reason for this business deal, and although the agreement ensured Portugal’s legal administration of Macau, it remained a sovereign part of China. Over the many years of the Portuguese occupation, the country had very good relations with China except in 1517 when relations became shaky when the Ming Dynasty did not want to continue diplomatic relations with the Portuguese. The Malaccan sultan sought Chinese assistance in driving the Macanese from their shores, and during a shipwreck in 1535 after five years of refusal to allow them access to the shores of Macau. They were allowed to anchor trading ships along the Macau coast, but not to settle on the shore.

Although the arrangement was precarious at best, trade flourished and the Portuguese were instrumental in helping China to get rid of pirates who were plaguing their waters. Trade relations further improved, and in 1557 an agreement was signed for permanent trade between both countries and the region.

Leases were drawn up and payment for the living was paid annually. The Portuguese, even though they were permanently living there, were small in number, only 900-1200 occupants, and there were never intermarriages between the Chinese and the Macanese.

Diplomatic relations continued over the many years between China and Portugal even though there were some bumps in the road. In 1999, Macau was handed back to China as the agreement stated years before. During the talks for the handing over it was agreed that Macau would not be governed by the Socialist dictates which govern China. The agreement also adds that the defence and foreign affairs would be a joint effort and the running of the country would be by the Portuguese who would have full autonomy. This would continue until 2049. 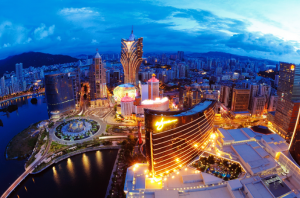 Dubbed as the “Las Vegas of Asia,” casinos started emerging in 1999 and has continued to grow and is now a permanent fixture today. The casinos have brought economic leverage to the region, as hotels, schools, colleges, and apartments were built to accommodate the growing influx of visitors and families to the region. During 2014, there began a slowing down of the economy due to the world’s recession, and so the government had to find other ways to enhance the economy. The dependence on gambling was lessened as China had changed and enforced their anti-corruption laws which affected Macau because of their connections politically. The tourism side of the country saw the Chinese venturing outside the region for more cultural experiences. This further weakened the economy of Macau, and although many Macanese still depend on casinos for their livelihood, they do eke out a good portion of their economic stability from tourism, which is enhanced by the rich blend of Chinese and Portuguese cultures and cuisine.

The country is small in population, now at 582,000. Compare the figure of the past of 900-1200; this growth, though steady, shows great population control.