South America encompasses a huge continent made up of several countries. It is in the western hemisphere with a small part of the land skirting the northern hemisphere. South America has shaped the political landscape of the region because of its diverse cultures. 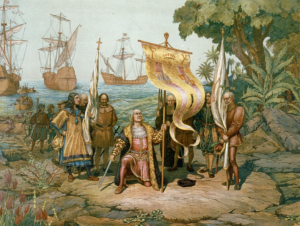 Colonization of South America began in the year 1494 after Christopher Columbus had made his discovery of the Continent. Spain and Portugal, which were also seeking new lands and territories, signed the Treaty of Tordesillas, which was sanctioned by the then Pope. The content of this treaty was for both countries to control lands discovered outside of Europe. The treaty also established lines of demarcation as to the exact places or countries that were under control of either Spain or Portugal; it indicated lands on South America would belong to Spain and Eastern lands would belong to Portugal. Portugal was not so honest in their adhering to the geographical markers as they progressively inherited most of Brazil into their portion of the control. Really, this was mainly because of inaccurate means of latitudinal and longitudinal demarcations.

Great exploitations of these countries lands and resources were the order of the day, and they were claimed as their own by Spain and Portugal. In the process of exploration, the two countries brought a devastating magnitude of deaths to the natives from the many diseases which were spread by these foreigners, as their immune systems were not able to fight diseases such as malaria, smallpox, typhus, influenza, and measles. These diseases wiped out thousands of the natives. Those who did not succumb to disease were subject to the slavery treatment metered out to them as well. They were worked hard and treated harshly in order to maintain the level of reaping the natural resources as well as growing crops for the Colonizers. The death of the natives forced Spain and Portugal to import African slaves whose immune systems could fight the many diseases. 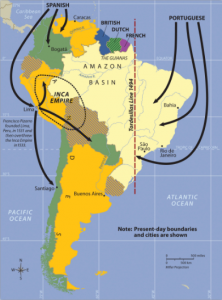 Colonized countries by the Spanish were the West Indies, Peru, Mexico, Cuba, Rio de la Plata and Paraguay, and New Grenada. The occupation spanned from 1492-1834; Cuba, Puerto Rico, Guam and the Philippines were given up by Spain after the Spanish-American wars for independence in 1898, which it lost to the above colonies. This ended Spain’s control and rule over these territories.

Countries colonized by Portugal were: Brazil, which was the main concentration in 1492 of the South Americas for colonization, and even though attempts were made to conquer and colonize Canada, it was not successful. Portugal’s short- time holdings of certain parts of Canada included Newfoundland and Nova Scotia, Labrador and Portugal Port St-Phillips where it established fishing posts in 1521. Today a strong cultural exchange still exists between Canada and Portugal.

The economic segregation today within the countries of South America has been very noticeable. Economically Brazil is the largest exporter within the region with Venezuela, Chile, and Argentina following close behind. The distinct gap between classes is seen in the infrastructure, as modern buildings continue to spread while shacks and huts still comprise a large part of the building landscape. Colonization still lingers, in part based on the way of life of the masses; many live on average of less than U.S. $2 per day. Independence may look glamorous initially, but maintaining and helping societal progression among all classes has not been the general consensus for all.