We live in a changing world, and thanks to new technologies like the internet and communication gadgets like smartphones and tablets, we can see history unfold in real time. And if you are a keen follower of history, then you should know that during the past few decades, a number of world-changing developments have taken place, including the transitions made by different colonies around the world. Through the years, a number of colonies in the world have gained their independence and became independent and sovereign powers. The information about these former colonies and their transition from a dependent to an independent country is covered and explored on this site.

Colonialism is an important historical and political concept, and we will help you understand this in detail. By browsing and reading our resources, you will get a full and complete understanding of colonialism as a political concept. Colonialism refers to the establishment of a government that rules a foreign people over an extended period of time. These areas are separate from the main part of the colonizing country and they assume a subordinate role to the ruling power (or government). Although this is connected to colonization, keep in mind that these are still two different concepts. In colonization, it requires the settlement of residents of the mother country in the new territory. But in colonialism, a physical residence may not be necessary, provided that the influence in culture and affairs are noted. This is the case with a number of colonies that have been formed in the past, from the Greek colonies in the past, to the colonies of America, Spain, and Portugal. A discussion of colonialism will also include the colonies of Japan that were lost at the end of the Second World War. 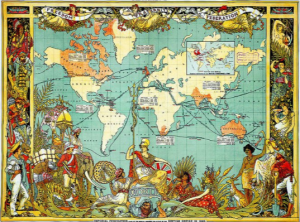 By browsing our collection of stories, resources, and guides, you will get a holistic understanding of the political and cultural concept called colonialism. Here, you get to learn how power is distributed, and where power is concentrated. Some of the common questions about colonialism will be discussed here as well.

Does colonialism also extend to cultural and commercial domination?

What happens to trade and the natural resources of the colony when they are subjugated by other countries?

These are just some of the questions that will be covered on this site. So go ahead, explore this site, and learn what colonialism means, and how it affects world affairs then and now.